Don't Worry, it's Not a Medical Emergency 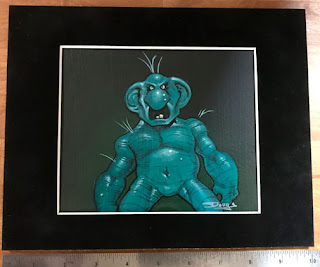 I’m arranging to sell Douglas Shuler’s original art for the Uthden Troll Magic the Gathering card. I love this painting. It’s my favorite card in the game. I love Scandinavian troll folktales, and the art of John Bauer and Theodor Kittelsen. I’m also very fond of orcs and goblins and all those other cranky, toothy guys from the stories, so of course I fell in love with the angry little Uthden Troll when I opened up my first pack of Magic cards back in the day. I’ve been thrilled to own the original artwork for so long.

I’ve had the painting since made a trade with Doug Shuler back when the game was new. I got the troll in exchange for the Cuombajj Witches artwork that I did for the Arabian Nights expansion. He’s hung on my wall for years, in a dark hallway that I like to think was a comfortable place for both trolls and original art.

Okay, the painting is one of my treasures, so why am I selling it?

Two reasons. First, I’m a little alarmed at how valuable he has become. Original Magic art has started selling for crazy amounts of money. According to various internet sources, my own painting of Shahrazad, from the Arabian Nights expansion, sold for $72,000 last year. I think I probably originally sold it for around $500, and was delighted to get it. Amazing. Having something like that lying around my house makes me jumpy. (I've already relocated Mr. Troll for safe keeping, because, yikes.)

Second, and more immediate, I need the money. I’m actually writing this all up because I have had a lot of very kind people checking on me to ask if everything is ok. I’m really touched. When you work in your own Studio and seldom leave your lair, it’s nice to be reminded that people care. So I want to fill everyone in on what’s going on:

Our latest Kickstarter campaign funded earlier this year, and we had planned to have the latest volume of the Girl Genius Collection printed in time to ship in September. That left us with nothing really new for the Summer conventions, which cut our profits at those shows to about half what they usually are. That perhaps shouldn’t have been a huge surprise, but…well…it kind of was. I am aware that I need to improve my grasp of business finance. I’m working on that pretty hard now, actually.

In addition to the bad sales at the Summer shows, the book is now coming out much later than we expected. There are a lot of production reasons for this that I won’t go into. The new collection is looking great, and now it’s on the way, so hooray.

So now, we’re dragging along into what are always the lean months of the year, but it’s worse than it’s ever been because we timed things badly and our cash flow is completely, as we say in the very serious World of Cartoon Finance, borked.

I want to stress that I am well aware of our privilege here. We are not in any real danger, we are merely temporarily embarrassed for money. There are people out there who truly have money problems, and have no way of getting out from under them. Compared to those folks, we have nothing to complain about. We’ll get back on our feet, and hopefully plan things better in the future. That doesn’t mean that I don’t have to do something about it, though. I have people that rely on me to pay them regularly, and I have to make sure that I keep my medical insurance, or this will become a medical emergency. (A lot of you know that I have Crohn’s disease, which has sent me to the hospital a couple of times. No big deal, I have it a lot easier than most, but I’d better keep that insurance.) I also need to make sure that, when the boxes of Girl Genius Volume 18 show up, I can pay for the postage to ship them all out to our Kickstarter backers.

Studio Foglio is a tiny company. It’s me and Phil. Cheyenne does the color work freelance, and Chris helps us with the email part time. My Mom and kids help out once in a while when we have envelopes to stuff. For a tiny, often-overwhelmed company like ours, Kickstarter has made a lot of things easier. It allows us to get a general idea of how many books to print, and lets us pay for the print run out of profits from the book itself, rather than scraping up the capital in other ways beforehand. It is also fantastic for getting the word out.

Nevertheless, taking preorders through Kickstarter carries a lot of responsibility. I’ve backed several campaigns where the rewards never shipped, often because the people behind them ran out of money and/or just wandered off. I just shrug when it happens to me, it’s part of the Kickstarter experience, I guess, but I also promise myself to NEVER be that guy. I can’t be that guy. Even if I was okay with taking people’s money and not delivering, which I am absolutely not, (Lawful Good, thanks, ) I can’t afford to do something like that. After all, I’ll have another book coming next year. And the year after that. What I’m saying is, sometimes it takes me a while, but I must get the Kickstarter rewards out. It’s a sacred obligation.

So. I’ve borrowed a bunch of money to keep us going. I’m trying not to spend much, and I’m selling off some Magic the Gathering art. I’m also getting back to eBay sales, digging through our own original art, and looking at places to post things like art prints. I’ve also found a bunch of old, silly T-shirt designs that we never posted anywhere. I’m also trying to find some things to post over on our Patreon page to thank all our Patreon backers, who’ve really made a difference to us through all of this.

In conclusion, we’re on rough seas, but don’t worry about us, we’re keeping the ship above water. It’s going to be a lot of work, but we’ll get through it like we always do, and we’ll probably even be better for it. We’ll have new things for sale when we can, and this Summer, maybe even a second new book. Oh, also, the new Girl Genius novel is coming out this Spring! Watch the main page at www.girlgeniusonline.com for all our announcements, and thank you all so very much for your concern and support! I’ll let you all know how the auction goes.

*One thing this is doing is forcing me to actually write blog posts and cope with social media, something I’m really bad about. So that’s good, I guess?

*Also, speaking of original art and Kickstarters, there are still a few of you that I will be contacting about the original art from the name-insert pages. I need to double-check your addresses. Thanks!
Posted by Kaja Foglio at 10:22 PM