Setting up a new Kickstarter campaign, and thoughts on stretch goals

Cheapass Games is off on the JoCo Cruise, which is lovely for them, and not too bad for us, since it means they can't frown at us over all the art we're supposed to be getting to them for the new edition of the Girl Genius The Works card game. I'm told they might be demoing it on the cruise, so if you're there, lucky you, and see if you can get in on it! When they get home, we'll have a whole bunch of new art for them, and our newest Kickstarter campaign up and running.

I spent all day today fighting a nasty migraine, and getting the campaign ready. It's probably the weird changes in the weather, we've been having snow here in Seattle, which is extremely odd for this time of year. I love it, but I do sometimes get headaches when the weather changes. Bleh. At any rate, I've got everything but the video set up. I really don't think I can get away without some kind of video this time...I had to post last year's campaign without a video and it just didn't feel right.

The other thing that doesn't feel right...running a new campaign when I still have old stretch goals that I haven't finished up. They're all digital fun-type things...and I have to get the book out, or we won't be able to pay people like our color artist Cheyenne and our email helper Chris and our local grocer Art...but they bug me. I have a partially-designed box for the first 13 Girl Genius books taking up all the space on my work table, but I've had to leave it there while I set up the campaign. (I'd been hoping to squeeze it in before the campaign went live, and I still might, but time will tell.) Underneath it is the test printing of a PDF dust jacket for the hardcovers, which I need to photograph (or film) myself using, for illustration purposes. So people can see how it's meant to be used when I post it. I still have to figure out how the heck the Jägermonster toast goes. It turns out none of the Jägers can decide on the traditional one, and then they all start fighting, and everything I come up with sounds stupid. We'll see. I'm still working on remastering all of our old desktop wallpapers, I'm about two-thirds of the way done with that. I'm trying to do one a day, at minimum, but it's amazingly slow going. It turns out there are a lot of them. So...I'm really trying not to add any more of that "I will do X" kind of stretch goal. I have some ideas for this campaign that will help me avoid that sort of thing, at least until I finish up my old ones. If you're interested in the status of our uploads, they're all listed at the bottom of the Kickstarter Information Page I've set up on the Girl Genius web site, so that I have the list all in one place and can keep track of it. I want that monkey off my back.

And of course, there's the big monkey on my back, the fob from the City of Lightning campaign. It's got a profile face on it, and it has been the biggest manufacturing hassle I've ever had to deal with. I think we've finally got it right, but I won't know until next Monday at the earliest. I'm really excited about it, though, I designed it because it's exactly the one I want, and I can't wait to actually have it in my hands. I've never put a picture in this blog before, so I'm going to try it out now. Here's the latest set of notes I sent to the pin maker: 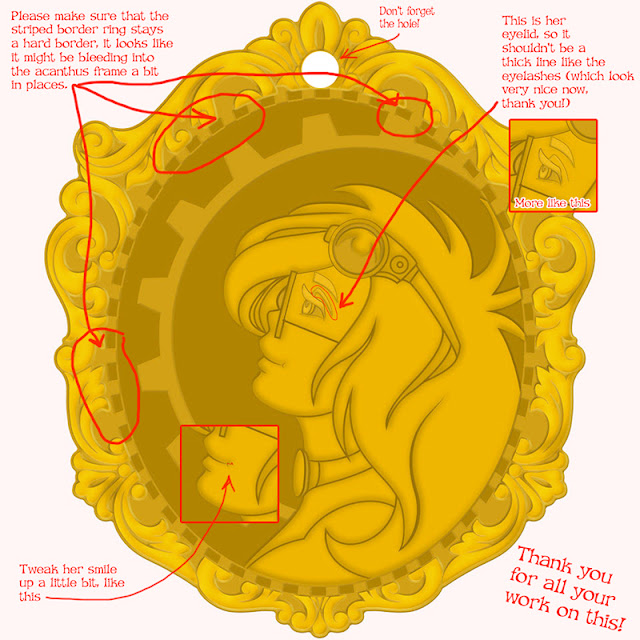 I'm expecting metal samples soon, and then we'll be nearly there. Right now, I'm off to bed. I really should stay up all night and get that video done, but...eh...I'm sleepy.

Rambling about Kickstarter Fulfillment and Shipping

The Kickstarter Backer Contact Form seems to be working well, we spent quite a bit of time over the weekend tracking down lost packages and packing up replacements for damaged or mispacked shipments. Chris, who does part-time work helping us deal with the mail, goes through the form responses and sends me a list of things to re-send or check into, and I check into them and then pack up books and re-send them. It's been a bit harrowing, but I feel good about getting the customer service more under control.

All this has really bringing home to me how much I love the new system we're using--BackerKit and MakeThatThing and Stamps.com for anything that needs to be shipped from my house--because the old systems have me digging through spreadsheets and huge binders full of packing slip copies to find the details of five-year-old pledge rewards.

For the first several Kickstarter campaigns, we packed and shipped everything from our basement. That means that my Mom was down there for ages packing things, then taking them to the post office every day. Sometimes our friend Carol from Cheapass Games came in and did the same thing, mostly for Beast of the Rails, if I remember. We weren't able to get tracking numbers back then. I have now learned how much I love tracking numbers.

Also for the first few campaigns, I was not in charge of the whole circus. That makes it even harder for me to go back and check on the crunchy details of things.

I really like having MakeThatThing ship the bulk of the rewards, and if we're on a good schedule, we can even have books mailed directly from the printer to our backers. That saves a lot of trouble, but means that we have to have our backer surveys in by the time the printer needs the shipping list. We weren't able to do that last time, and it really bit me hard. I'm setting up a new campaign for Kings and Wizards (the 17th Girl Genius collection) and this time, I've built in time to have it shipped from the printer. I love getting the book to our backers right away, it takes a lot of the stress off.

Well, I should stop "thinking out loud" about it here, and get back to work. I've got that next campaign to set up, and the pressure is on hard.

I've made a lovely new information page with up-do-date status reports for all of our past Kickstarter campaigns.

I've also made a lovely new "Contact Us" form for our backers to use, once they've looked at the status reports and realized that the thing they thought we never sent to them probably just got lost in the mail. (We were not always able to send tracking numbers in the past.)

Our friend Carol Monahan (from Cheapass Games) is seeing to it that our old pledge managers are shut down. Carol's helping us get our ducks in a row so that we can get our next book out, so that her company can get the Girl Genius : The Works card game out. We are all in each other's pockets around here. Someday I'll draw up a chart. ANYWAY:

She's making sure that there's a proper note on the landing page of each old pledge manager, telling people that, although the pledge manager is closed (like the ancient tomb it is) it's not too late to contact us for customer service. Because it's not. We still have little hoards of most rewards squirreled away, just in case.

The thing is, all those old Kickstarter campaigns are getting harder and harder to keep track of. A message on an old campaign page is easily missed, (although we do try to look things over regularly, it seems to happen more than we'd like.) So we're trying to consolidate things, to make things easier for our backers, and to make things easier for ourselves. Hence, the new information page. I hope it helps!
Posted by Kaja Foglio at 7:00 PM